Background: Cellular homeostasis is regulated by the intricate interplay between a plethora of signaling pathways and “energetic sensors” in organs. In order to maintain energy balance, induction or repression of metabolic pathways must be regulated and act in concert with the energetic demands of the cell at a given point in time. A new class of small noncoding RNAs, the microRNAs (miRNAs), has added yet further complexity to the control of metabolic homeostasis.

Objective: Understanding the damages induced by toxins in the liver and the intestine as well as the interplay between the miRNome and transcriptome first requires baseline characterization in these tissues in healthy animals under cellular homeostasis.

Methods: The liver (main site for detoxification) and the gut (primary exposure routes for contaminant exposure) were dissected out (wildtype fish), total and small RNA extracted, mRNA and miRNA libraries constructed and subjected to high throughput sequencing. Differential Expression (DE) analysis was performed comparing liver with gut and an “miRNA matrix” that integrates the miRNA-seq and mRNA-seq data was constructed.

Results: Both the miRNome and transcriptome of the liver and gut tissues were characterized and putative novel miRNAs were identified. Exploration of the “miRNA matrix” regulatory network revealed that miRNAs uniquely expressed in the liver or gut tissue regulated fundamental cellular processes important for both organs, and that commonly expressed miRNAs in both tissues regulated biological processes that were specific to either the liver or the gut.

Conclusion: The result of our analyses revealed new insights into microRNA function in these tissues. 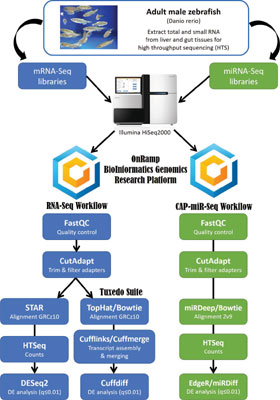