Flooding is one of the most hazardous natural disasters and a major stress constraint to rice production throughout the world, which results in huge economic losses. The frequency and duration of flooding is predicted to increase in near future as a result of global climate change. Breeding of flooding tolerance in rice is a challenging task because of the complexity of the component traits, screening technique, environmental factors and genetic interactions. A great progress has been made during last two decades to find out the flooding tolerance mechanism in rice. An important breakthrough in submergence research was achieved by the identification of major quantitative trait locus (QTL) SUB1 in rice chromosomes that acts as the primary contributor for tolerance. This enabled the use of marker-assisted backcrossing (MABC) to transfer SUB1 QTL into popular varieties which showed yield advantages in flood prone areas. However, SUB1 varieties are not always tolerant to stagnant flooding and flooding during germination stage. So, gene pyramiding approach can be used by combining several important traits to develop new breeding rice lines that confer tolerances to different types of flooding. This review highlights the important germplasm/genetic resources of rice to different types of flooding stress. A brief discussion on the genes and genetic mechanism in rice exhibited to different types of flooding tolerance was discussed for the development of flood tolerant rice variety. Further research on developing multiple stresses tolerant rice can be achieved by combining SUB1 with other tolerance traits/genes for wider adaptation in the rain-fed rice ecosystems. 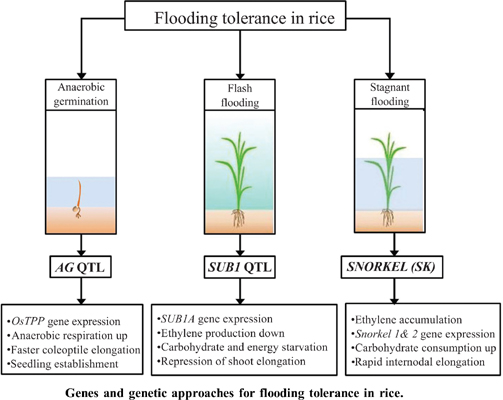