The genetic background is unknown for the 50-60% of the HNPCC families, who fulfill the Amsterdam criteria, but do not have a mutation in an MMR gene, and is referred to as FCCTX. This study reviews the clinical, morphological and molecular characteristics of FCCTX, and discusses the molecular genetic methods used to localize new FCCTX genes, along with an overview of the genes and chromosomal areas that possibly relate to FCCTX. FCCTX is a heterogeneous group, mainly comprising cases caused by single high-penetrance genes, or by multiple low-penetrance genes acting together, and sporadic CRC cases. FCCTX differs in clinical, morphological and molecular genetic characteristics compared to LS, including a later age of onset, distal location of tumours in the colon, lower risk of developing extracolonic tumours and a higher adenoma/carcinoma ratio, which indicates a slower progression to CRC. Certain characteristics are shared with sporadic CRC, e.g. similarities in gene expression and a high degree of CIN+, with significanly increased 20q gain in FCCTX. Other molecular characteristics of FCCTX include longer telomere length and hypomethylation of LINE-1, both being a possible explanation for CIN+. Some genes in FCCTX families (RPS20, BMPR1A, SEMA4A) have been identified by using a combination of linkage analysis and sequencing. Sequencing strategies and subsequent bioinformatics are improving fast. Exome sequencing and whole genome sequencing are currently the most promising tools. Finally, the involvement of CNV’s and regulatory sequences are widely unexplored and would be interesting for further investigation in FCCTX. 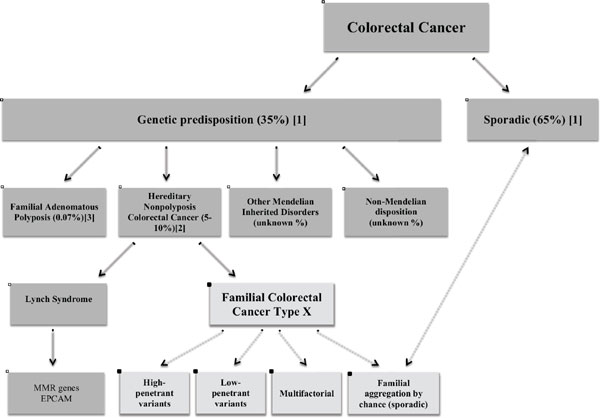