Polytene Chromosomes – A Portrait of Functional Organization of the Drosophila Genome


This mini-review is devoted to the problem genetic meaning of main polytene chromosome structures – bands and interbands. Generally, densely packed chromatin forms black bands, moderately condensed regions form grey loose bands, whereas decondensed regions of the genome appear as interbands. Recent progress in the annotation of the Drosophila genome and epigenome has made it possible to compare the banding pattern and the structural organization of genes, as well as their activity. This was greatly aided by our ability to establish the borders of bands and interbands on the physical map, which allowed to perform comprehensive side-by-side comparisons of cytology, genetic and epigenetic maps and to uncover the association between the morphological structures and the functional domains of the genome.

These studies largely conclude that interbands 5'-ends of housekeeping genes that are active across all cell types. Interbands are enriched with proteins involved in transcription and nucleosome remodeling, as well as with active histone modifications. Notably, most of the replication origins map to interband regions. As for grey loose bands adjacent to interbands, they typically host the bodies of housekeeping genes. Thus, the bipartite structure composed of an interband and an adjacent grey band functions as a standalone genetic unit. Finally, black bands harbor tissue-specific genes with narrow temporal and tissue expression profiles. Thus, the uniform and permanent activity of interbands combined with the inactivity of genes in bands forms the basis of the universal banding pattern observed in various Drosophila tissues. 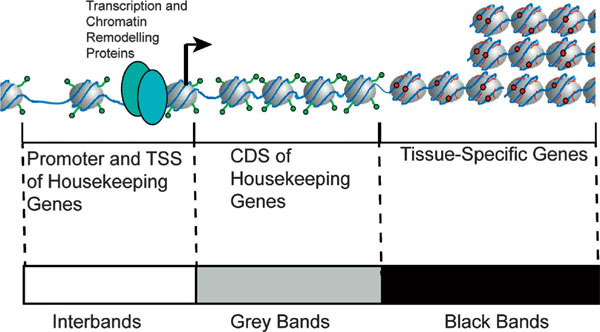