Background: Our previous studies have revealed the roles of ribosomal protein (RP) genes in the abiotic stress responses of rice.

Methods: In the current investigation, we examine the possible involvement of these genes in insect stress responses. We have characterized the RP genes that included both Ribosomal Protein Large (RPL) and Ribosomal Protein Small (RPS) subunit genes in response to infestation by two economically important insect pests, the brown planthopper (BPH) and the Asian rice gall midge (GM) in rice. Differential transcript patterns of seventy selected RP genes were studied in a susceptible and a resistant genotype of indica rice: BPT5204 and RPNF05, respectively. An in silico analyses of the upstream regions of these genes also revealed the presence of cis-elements that are associated with wound signaling.

Results: We identified the genes that were up or downregulated in either one of the genotypes, or both of them after pest infestation. The transcript patterns of a majority of the genes were found to be temporally-regulated by both the pests. In the resistant RPNF05, BPH infestation activated RPL15, L51 and RPS5a genes while GM infestation induced RPL15, L18a, L22, L36.2, L38, RPS5, S9.2 and S25a at a certain point of time. These genes that were particularly upregulated in the resistant genotype, RPNF05, but not in BPT5204 suggest their potential involvement in plant resistance against either of the two pests studied. 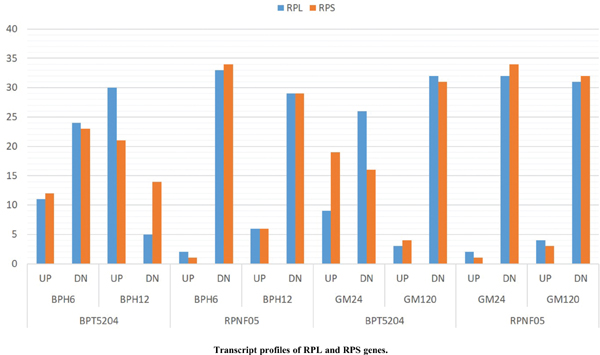