Background: Lysine succinylation is one of the reversible protein post-translational modifications (PTMs), which regulate the structure and function of proteins. It plays a significant role in various cellular physiologies including some diseases of human as well as many other organisms. The accurate identification of succinylation site is essential to understand the various biological functions and drug development.

Methods: In this study, we developed an improved method to predict lysine succinylation sites mapping on Homo sapiens by the fusion of three encoding schemes such as binary, the composition of kspaced amino acid pairs (CKSAAP) and amino acid composition (AAC) with the random forest (RF) classifier. The prediction performance of the proposed random forest (RF) based on the fusion model in a comparison of other candidates was investigated by using 20-fold cross-validation (CV) and two independent test datasets were collected from two different sources.

Conclusion: The prediction performances as discussed in this article recommend that the proposed method might be a useful and encouraging computational resource for lysine succinylation site prediction in the case of human population. 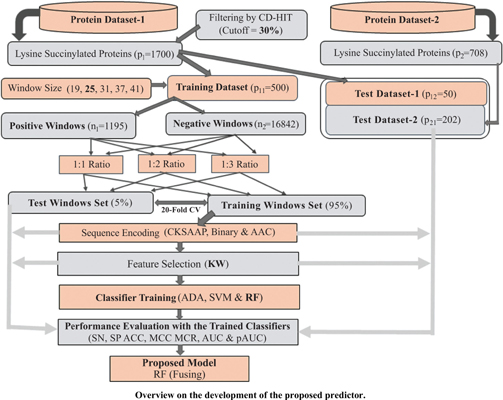